Imagine walking around the Louvre or the British Museum and happening across a wing dedicated to a previously unknown civilization from antiquity. The mythical Atlantis, for example. Amazement at this unexpected discovery would soon give way to a sensation of spotting affinities and assonances with artefacts left behind by other, better-known peoples and worlds.

This is the impression evoked by a journey around these “Other Possible Worlds”, a “fabulous” Museum of Mankind where the display cases house statues that depict representations of the human figure. These faces and bodies date back to eras and kingdoms from an imaginary – and oddly plausible – past. Our initial surprise is multiplied by the discovery that these forms have been created from found objects that are themselves a product of human endeavour.

Pregnant with memory, these images are somehow both remote and very much up to date. It’s almost as if this pre-history might be our vanguard. The work goes beyond exploring form to investigate the motifs and motives that have always prompted human beings to depict themselves.

"Marco Barina truly seems to want to create a new, wondrous world of images, using a retinue of figures from his own imagination. These he has reconstructed, piece by piece, to create a new history of art, inflected by distant peoples and cultures, different among themselves but which together magically bear witness to a lost, alchemical world."
Anna Mattirolo, Assembling worlds

'BARINA USES FOUND OBJECTS ... BUT FROM THESE HE CREATES STILL OTHERS, WHICH ARE UNEXPECTED AND BEAUTIFUL, BOTH LEGIBLE AND MYSTERIOUS.'
Maurizio Ferraris, Barina's Mummies

'THESE SCULPTURES SEEM TO LOOM UP OUT OF THE DARK'
Valerio Magrelli, The Eyes Have It

Go to "The New Museum" 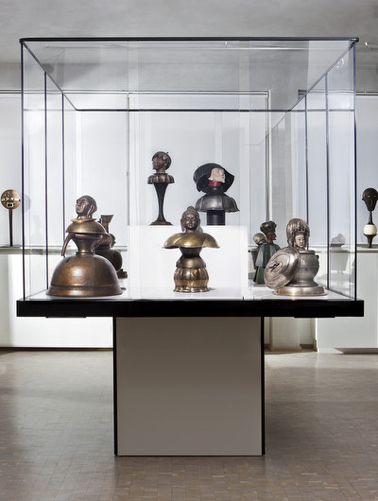