This long, long journey back in time begins with Lucy, the first hominid whose remains are preserved at the National Museum in Addis Ababa. According to anthropologists, this is where the human adventure began.

Our journey from the remotest of times to the present day begins from this "primary" image. Through sudden leaps that juxtapose distant epochs and civilizations, the forms in which human beings depict themselves reveal immediate yet "mysterious" assonances, precisely because of the temporal and geographical distances that so often underlie these comparisons.

Philosopher Maurizio Ferraris has described this work as “a fabulous archive of images, showcasing the metamorphoses of the human figure, and especially the human face, from the most varied cultures and ages. The archive is of value in itself. It is also a valuable way of pitching together traditions, transferals and transformations that turn the images that make up the cultural memory we store in our minds into our own personal archive.”

"The Metamorphoses of Lucy" was assembled over the course of a year from thousands and thousands of photographs. This huge archive was gradually whittled down to a final selection of 150 images. The work's epilogue is open to a variety of readings. As long as men and women remain alive, infinite variations remain possible.

Go to "Metamorphoses of Lucy" 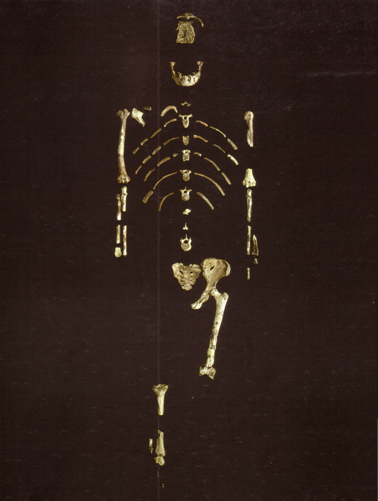